The Amazing Thailand Marathon is coming to you on February 4, living up to its name with an incredible marathon course that takes runners through the streets of Bangkok and past some of the city's incredible landmarks. The event is sponsored by Toyota and Ironman with support from Thailand Tri-League and the Tourism Authority of Thailand. There are four different race categories to enter, and each race leads through this amazing city. Nearly everyone can participate since the shortest run, the Muang Thai Smile Run, is only 3.5 km. 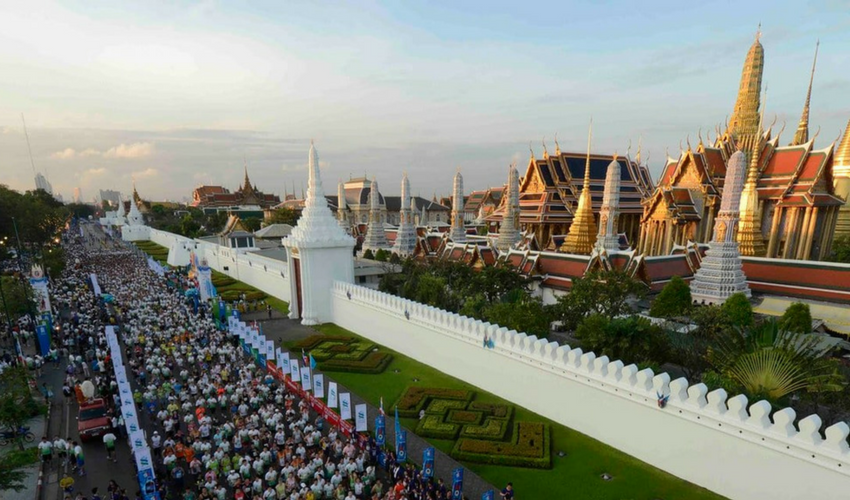 The Bangkok Airport Rail Link will be the site of an expo February 1-3 that will feature exclusive promotions and activities for the whole family, including a short warm-up race. The family race route will wind around the airport rail link and there will be entertainment along the way. The expo will provide a fun opportunity to sample traditional Thai food while enjoying music from local performers.

The 42-km marathon will begin at Rajamangala Stadium, home to the Thailand National Football Team. On the February 4 race day, runners in the marathon will pass some of the most awe-inspiring attractions in Bangkok:

This 8-meter (26-foot) tall obelisk rises against the blue sky at the center of a traffic circle at the intersection of three roads. Erected in 1941, it commemorates the Thai victory in the war with France. At its base, there are four statues designed and created by the Italian artist Corrado Feroci (Silpa Bhirasi). They are lifelike depictions of soldiers from the Army, Navy and Airforce, along with members of the Police and Militia. Surrounded by lights at night, it's one of the most familiar sights in Bangkok.

Gracing the Royal Plaza in Bangkok, this monument is the first one to be dedicated to a Thai king. A pedestal holds a statue of King Rama IV (King Chulalongkorn) riding a magnificent stallion, and it was built to honor the 40th anniversary of his coronation. The monument was completed in 1908, and the statue and pedestal are at the center of the Royal Plaza. The round plaza has steps leading up to the king in his full military regalia. This popular site for prayers is deeply revered by the Thai people.

The Temple of the Golden Mount, also called Wat Saket, is an ancient temple in Bangkok that was built under the reign of King Rama V. The beautiful temple rises above the city with its 77-meter (252-foot) golden spires. Ancient Buddhist relics are stored at the top of the structure. This is a fascinating attraction to explore while visiting the city, with its Sri Maha Bodhi tree and artifacts. A 334-step spiral staircase leads to a panoramic view of the city at the top. Locals come here to pay respect to the Buddha during the Loy Krathong festival each year.

This 475-meter bridge opened in 2002 to link Wisut Kasat Road in Bangkok with Arun Amarin Road in Thonburi. The bridge resembles a giant harp with 84 cables strung from an inverted y-shaped concrete pylon. Construction was a multi-country effort, and the imposing bridge was designed by Canadian bridge-builders. Decorated with lotuses, the bridge has pavilions in the shape of elephant feet at the bottom. It's an inspiring icon that has even been printed on Thai bank notes, and royal barge processions are celebrated here along with other special events.

All of the routes wind through the city of Bangkok, past monuments and other fascinating sights. There are routes for all skill levels, including a half-marathon and short run:

Around the Airport Rail Link starting at Ratchadamnoen Road.

This course is billed as a 'Family Fun Run' and the event takes place at the Expo on Saturday, February 3. An enjoyable 3.5-km (2-mile) jaunt, this is a race that's perfect for the family to tackle together. It's a non-competitive run designed as a warm-up for the next day's races. Children five-years-old and up can participate in this category, and it's a great way to help them burn off their excess energy!

Departs from the Democracy Monument at 6 a.m. February 4.

At just over 10 km (6 miles), this is a walk/run course for all skill levels. The length is perfect for those who have some experience with running and are looking for a challenge. Most people can complete this course in a reasonable amount of time regardless of their running speed. It's also suitable for beginners who may need to walk part of the time.

Departs from the Democracy Monument at 5 a.m. February 4.

The half-marathon is a race designed to test the limits of even seasoned athletes. Although it's half the length of the main event, it's still a challenging race for any skill level. Some professional runners concentrate on this level and work on their run times rather than competing for distance.

This is a grueling 42-km (26-mile) run that's suited to those who have trained and practiced for the preceding year. It's not a race for anyone who isn't regularly physically active. Runners in the 42-km marathon are in peak physical condition and have completed shorter races in preparation for the event. Free shuttle service will be provided from the Airport Rail Link to the stadium beginning at midnight.

Thailand Tri-League and the Tourism Authority of Thailand are collaborating with Toyota and Ironman to bring this race to the public. Sponsors also include The Bangkok Bank, sponsor of the 10-km race. The objective of the race is to bring running and sports to the forefront while bringing people together for this inspiring event. The inaugural run is expected to draw up to 30,000 runners, and many have committed to future races as well.

The Amazing Thailand Marathon couldn't have been planned without the tireless work of the organizers. The objective of the sponsors is to bring runners from around the world to participate, along with their friends and family. The marathon is a multi-cultural festival and sports competition that gives people from many different countries an opportunity to get to know each other better. The race will celebrate a common enthusiasm for sports and running, and it will also be a way for a diverse population to experience Thai culture.

On the day of the race, there will be an early start to avoid the worst heat of the day. Flag-off for the marathon will be at 2:30 a.m., and it will take place at Rajamangala Stadium. Transportation for runners will be available from the railroad hub and, during the race, roads will be closed to help ensure a safe route for participants. All along the way, there will be entertainment and musical performances to encourage the runners.

The Amazing Thailand Marathon will feature attractions and food throughout the day, and visitors will be able to sample the best fare Bangkok has to offer. For world-class accommodation while you're there, the Sukhumvit Bangkok is a boutique 5-star hotel situated in a popular tourist area of the city. If you need a larger place to stay, the Thonglor Bangkok offers 1-3 bedroom suites, and it includes the convenience of an adjacent mall and 24-hour market.

Running a marathon is an exacting test of physical fitness and endurance, and crossing the finish line is an inspiring goal for many. This event embraces the ability of each person to find their personal best, and it's suitable for all ages and skill levels. But more than that, it's an opportunity for people to experience the culture of Thailand and the magnificent offerings of its crown city, Bangkok. The Amazing Thailand Marathon will continue each year, with commitments for five years from many of the sponsors and runners. Each year should bring increased attendance and participation as the word gets out about this unique and inspiring cultural event.