Located in the valley of the Ping River in northern Thailand, Chiang Mai, meaning new city and originally called Zimme by its Burmese inhabitants, was noted to have been built in 1294 A.D. The city has a rich and complex history embroidered with many myths, legends and folklore, adding to its charm. Because it is so historic and so beautifully surrounded by the lush, lower-lying areas of the great Himalayan Mountain chain, it is a welcome, peaceful attraction to tourists who want to escape the big city bustle of cities like Bangkok. The historic walls of Chiang Mai have all been restored from their original construction to what they are today. What they represent to the people of Thailand can never be altered. 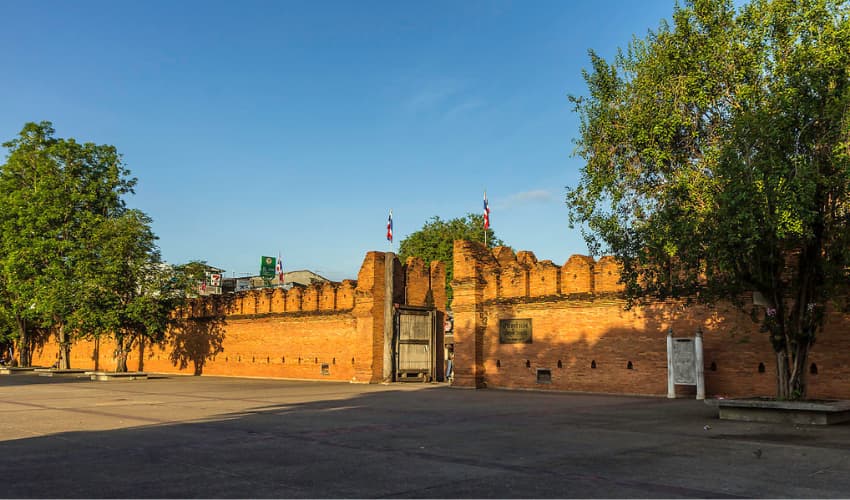 This is the northern gate. Since chang means elephant and phuak means white, this portal is also known as the White Elephant Gate. White elephants have traditionally been considered sacred in the Southeast Asian culture. It was first called the Hua Vieng Gate. It was the first gate of the first wall built to fortify the city of Chiang Mai and protect its inhabitants, ordered by King Mengrai in 1296. Hua Vieng was the gate used by royalty to make their grand entrance into the city.

It is within this gate that tourists will find themselves enthralled with the area's night market, opening at around 5 PM and closing at around 11 PM, known for its very inexpensive but equally delicious foods. Many of the offerings cost less than one US dollar. The street food here not only includes Thai delicacies such as various Thai chicken and seafood dishes, but Chinese and Japanese fare, as well.

The stall with the Thai woman in the cowboy hat serving up succulent, slow-roasted pork is one of the most recognised by tourists in Chiang Mai. If you're hungry during the day when the market is closed, right across the square you can find snacks and smoothies.

Also called Pae Gate, it is the eastern portal to Chiang Mai. Although in the 1980's, they tried their best to replicate the authenticity of the original design taken from old photos and drawings from before its demise in World War ll, purists are apt to criticise that its reconstruction is as close as it could be to the original built in 1296. In fact, some call the reconstruction "a contemporary piece of imagination."

Nonetheless, it is currently the gateway closest to some of the most exciting facets of the city, including many public square cultural and musical events. It is the entrance to the area that is most concentrated with restaurants, hotels, cafes and the like. In fact, it has an array of different types of accommodations from the plush, elite resorts to the hostel type for bicyclists and hikers.

It's well known for its live music on Saturday evenings with great food from a variety of vendors. Its dazzling Night Bazaar is noted for portraits and works of local artisans. There is a unique array of souvenirs to purchase for family and friends. If you're a little homesick for some western food, you'll find lots of it here.

Also called, Pratu Chiang Mai and Pratu Tai Wiang Gate, this is the portal to the southern end of the city and the closest entrance to the famous Saturday Street Market. If you don't happen to be there on the weekend, the area also hosts a daily afternoon market. Everyone seems to love Pa's Smoothie Stall where you can order a custom-made smoothie to suit your taste.

Since the food here is all local, there tend to be more natives than tourists at this market site. In the most ethnic variety, there may be some things you'll wish to pass over like fried red ants and bamboo worm, unless, of course, you're the adventuresome sort when it comes to crazy cuisine.

There is also a night market in this section, also referred to as Bumrung Buri Market after the name of the road where it's located. It actually opens late in the afternoon and runs into the morning hours since some tout having had fabulous breakfasts there. The markets closest to the Chiang Mai Gate are really all just one continuous market with changing names and some changing vendors so no matter what time you get there, you'll never starve.

This gate, also known as Suan Dok Gate is the western entry to Chiang Mai. Pratu Suan Dok is translated as "door to the flower garden." The main pagoda seen upon entry there is the Wat Suan Dok, containing relics of Buddha. The array of white mausoleums surrounding it house the remains of past rulers and nobles of Chiang Mai. The area is of special interest to photographers who may want to capture its beauty at sunset and especially at night when it is brilliantly lit.

Chang Phuak, Chiang Mai Tapae and Partu Suan Dok, are the original north, south, east and west portals of the city, all constructed in the 13th century under the orders of King Mengrai. A fifth gate was constructed some years later under the orders of King Saen Muang Ma for his wife's private entry to the city. The portal was later used as a place to execute rebels. Still, sometime later, yet a 6th gate was ordered constructed by King Tilokraj for his personal convenience.

Keep in mind that the entire area of Chiang Mai is only about 15.5 miles so no matter which portal you enter to experience it, you're never far from any other area of the city. Hiking and bicycling are popular modes of transportation. So are tuk tuks and Song Thaews. Whatever mode of transportation you choose, and whatever gate you enter, you're sure to have a great time.