Join a cocktail-infused adventure around Bangkok’s hippest street with akyra’s exclusive bar hopping bonanza in the back of Thailand’s signature mode of transport — the tuk-tuk! You’ll discover some of Thonglor’s best-kept boozy secrets, high-end haunts and fabled hangouts before finishing up the way locals do with a steaming bowl of traditional rice soup at the legendary street-food shop 55 Pochana. 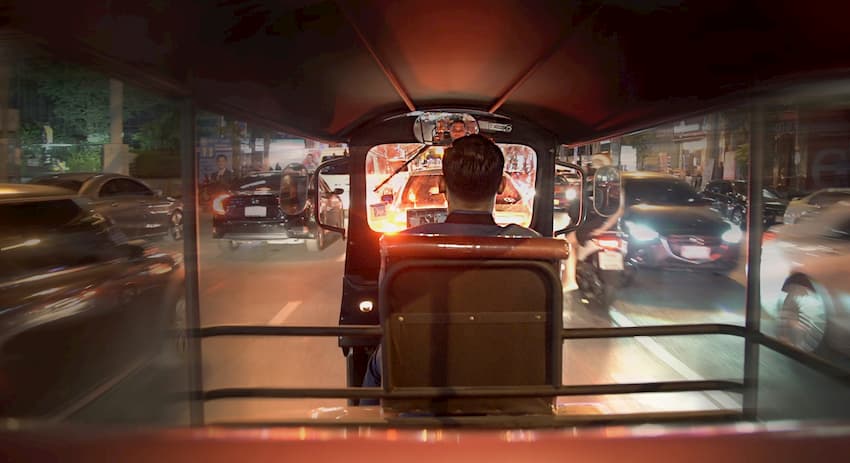 Aussie interior designer and all-round show boater Ashley Sutton has almost single-handedly transformed the drinking landscape along Thonglor over the last decade. Iron Balls Distillery is the latest in his mouthwatering list of conquests, combining marine-themed steampunk aesthetics with his eponymous craft gin to the delight of frequent visitors and first-timers alike. Slink into an inviting leather armchair, admire the nautical scenery and sip, slurp and savour one of many the juniper-forward creative cocktails. While gin does almost all the heavy lifting here, whiskey aficionados will find solace in the 3-Whiskey Old Fashioned and selection of single malts. Our recommendation? Follow the trends and opt for the crowd-pleasing Spitcock — Iron Balls Gin, passion fruit and roselle — or play it safe with one the many G&T combinations available.

Another easygoing establishment riding the recent gin craze, Just a Drink Maybe revels in serving up Asian takes on iconic cocktails with a particular focus on seasonal ingredients. Vibes in the narrow shophouse are laid back with a minimal decor of bare-brick and low-lighting that lets the drinks do the talking. The crowd meanwhile is a mix of well-heeled youngsters and post-workers soaking up low-key tunes and the occasional live DJ set. Whether you pull up a pew barside and watch the mixologists in action or locate a quiet corner to knock back just a drink (maybe), you’ll be spoiled for choice by one of Bangkok’s biggest gin selections. We’d suggest ordering one of the standouts from the recent ‘Floral Collection’ such as the light Mai Phed? or (very) heavy Blooming in a Snowfield. For those with more traditional tastes, their updated G&T, dubbed Beauty and Hendricks, takes some beating.

Thonglor boasts its fair share of the ‘hidden’ cocktail bars but Find the Locker Room takes the speakeasy theme to the next level — and then some. Concealed behind a wall of, you guessed it, unassuming lockers, this intimate venue was launched by a handful of Asian cocktail luminaries in 2018 and is just as famous for its clandestine location as it is the lush cocktails. Once inside you’ll be welcomed by a warm, understated atmosphere accompanied by big band tunes and classic jazz temporarily transporting patrons back to the Prohibition era. When it comes to the lubricants, the classics and creative originals vie for attention on the “past, present and future”-themed menu. Favourites include the various versions of a Bloody Mary, including the Bloodless Maria and Harakiri, the ambitious Nuts Over Michelin, which incorporates a foie gras fat-washed cognac (it’s delicious, honestly!), and a Thai twist on the Sidecar aptly named The Thai Godson of Sidecar.

If imitation is the sincerest form of flattery, ‘50s Manhattan jazz bars must be tipping their trilbies to Black Amber Social Club. The brainchild of Chavin Nantaterm, a onetime Ashley Sutton collaborator, the bar oozes old-world charm with moody lighting, plush leather furnishings and the odd quirky trapping like an ostrich skeleton for good measure. Black Amber Social Club is tucked away at the end of a dead-end alley, which alongside the gentleman club vibes inside, lends a sense of seclusion to this cosy venue. Behind the bar, whiskey reigns supreme with a menu brimming with full-bodied cocktails as well as a few fruitier options. The cigar selection is another highlight, ranging from affordable South American smokes to premium Cubans, such as Cohiba and Romeo y Julieta. Expect live jazz from around 9 PM later in the week in an environment that is as intimate as it is eccentric.

One of the more recent additions to Thonglor’s well-established cocktail corridor, Rabbit Hole is hidden behind an unmarked wooden door off the main strip. Upon entering, you’ll be tasked with sourcing a seat upstairs, on the second floor or alongside the bar in this stick-thin former shophouse. Snag a bar stool if you can and be mesmerised by the shaking, stirring, pouring and preening of colourful cocktails and potent potions back-dropped by a floor-to-ceiling rack hosting almost every bottle imaginable. Go for an adventurous in-house tipple like the Queen of Heat — a White Lady-inspired vodka cocktail brought to life by lotus syrup, lime juice and egg white — or their trademark Truffle Martini, which brings together truffle oil-infused Tanqueray gin, a hint of dry vermouth and olive garnish. Live DJs lay down the beats come the weekend, otherwise the music is a familiar blend breezy house beats and occasional pop and bossa nova.

Draw back the plush velvet curtain to reveal one of Thonglor longest-standing — and best-loved — cocktail haunts. It’s best described as a dream theatre experience for those who never want the interval to end. Borrowing from the concept of the hotel it inhabits, Playhaus, Backstage is both an homage to the glory days of the stage and golden age of cocktails. It’s not all about Manhattans, Old Fashioned and White Lady’s, however (although they’re all available on request), instead the focus here is on modern reinterpretations and original creations. There’s a rotating menu of specials colourfully written on the mirrors above the bar, but if you're only stopping for one we’d recommend the excellent Dead Poet or Aphrodisiac, two of a handful of their mainstay signature cocktails.

Pretentious? Perhaps, but there’s no denying the pizzazz of the drinks, decor and patrons at Thonglor’s infamous mixologist J. Boroski’s stamping ground. After making his name trailblazing the cocktail craze across Bangkok, the American opened his own bolthole a few years back with a little help from Ashely Sutton (yep, him again!). There’s no menu so be prepared to explain “how you feel” or simply what liquor floats your boat and the suited, booted and largely tattooed bartenders will do the rest. It’s always wise to check the price before getting too carried away, but by and large this cocktail-fiend favourite will not disappoint. The dark, brooding interior, which is bound to thrill entomophiles, sets to the tone, while jazz-age numbers crop up between classic rock and more recent hip hop and pop tunes for an eclectic musical experience that matches the endless opportunities on the drinks menu that exists only in the mind.

Arguably the bar that kick started Bangkok’s Thonglor love-in, Iron Fairies was a sensation when it opened its fairy-adorned doors a decade ago. Even today, the grotto is still packed to the rafters most nights of the week, welcoming curious tourists and devout locals looking for a ‘magical’ experience. Indeed, each of the four storeys is decked out in what can only be described as a steampunk-induced Wonderland conceived by Dickens and the Brothers Grimm. Instead, it was designed, again, by Bangkok nightlife supremo Ashely Sutton. Although you truly have to see it to believe, don’t forget to bring along the rest of your senses. On the taste front, try the legendary Smoke in a Bottle. We won’t spoil the surprise, but order if flamboyance (and vodka) are your thing. If not, there’s an eye-catching array of absinthes and plenty of other signature cocktails that the staff will happily explain. Hearing, meanwhile, is covered by slick jazz sounds from the live band, which plays nightly from 9 PM.