Free & Cheap Things to Do In Chiang Mai

Looking for some free and or cheap things to do in Chiang Mai? Chiang Mai has some amazing free and cheap activities both in the city and on the outskirts. Chiang Mai was founded at the turn of the 14th century, is best known for its old walled city and free to explore. 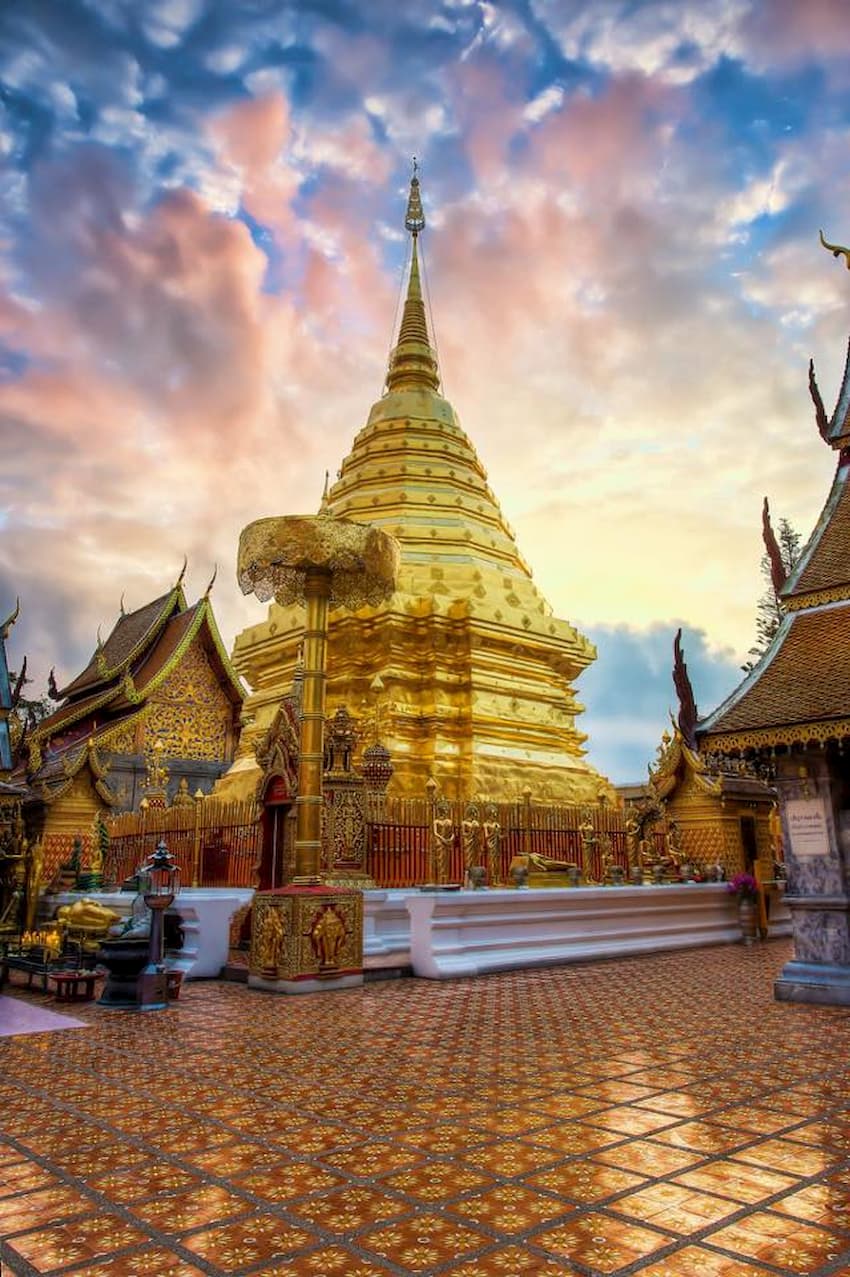 Start your adventure in Chiang Mai:

Most temples have metal donation boxes to receive monetary gifts. A typical donation is 20 baht.

This landmark honours the three kings who founded the city centre. Behind the monument is a white building known as the City Arts and Cultural Center.

2. Temple of the Fortified City

This is the oldest temple in Chiang Mai, built in 1296. It houses two revered Buddha images. One is made of marble and the other consists of crystal. Both are approximately 2,000 years old!

This is the northern gate. Since chang means elephant and phuak means white, this portal is also known as the White Elephant Gate. You will also find an evening market here between 5pm and 11pm with very cheap and delicious street food for as little as one dollar.

Mounted on the wall surrounding this temple are 50 golden horses!

Gold serpents line the steps to this elaborate temple. To the left is an immense yellow Buddha seated on a red platform. The upper floor of the temple has a grand hall with another golden Buddha in regal garb, flanked by maroon columns. Surrounding the complex are spires in burgundy and gold.

Also called Pae Gate, it is the eastern portal to Chiang Mai which is the gateway to public squares and is well known for its live music on Saturday evenings with great food from a variety of vendors and its night bazaar.

This is also the site of the Chiang Mai Flower Festival in the first week of February.

7. Temple of the Lion Buddha

This is an active temple where hundreds of monks and novices live. The complex includes two pagodas and a white-domed chedi between them. The Buddha within this shrine is considered the holiest statue in Chiang Mai. It came from the temple in India where Buddha achieved enlightenment.

This temple is a study in gold, with its glistening pagoda and adjacent dome. The building facade is clad in ornate golden scroll work.

9. Temple of The Great Stupa

Shaped like a pyramid, it rests on a foundation of terraced brick. A long staircase climbs to the top. A herd of elephants encircles the temple halfway up the side. The huge brick shrine, known as the Great Stupa, is the tallest structure in the old city. It features a Buddha statue at each corner. In the eastern corner is a jade replica of the Emerald Buddha.

A monk chat is an informal discussion with young monks seeking to practice English. Monk chats are held here daily from 9am-6pm. They are conducted at outdoor tables on the north side of the temple compound.

Also called, Pratu Chiang Mai and Pratu Tai Wiang Gate, this is the portal to the southern end of the city and the closest entrance to the Saturday Street Market.

The golden dome of Wat Phan On will take your breath away! This chedi is one of the most beautiful in all of Chiang Mai. The dome has red alcoves on all four sides bearing golden Buddhas.

The Night Bazaar on Chang Khlan Road is an eclectic market featuring all manner of Thai goods. On the south side of the Night Bazaar is the Anusarn Open Air Market with a wider selection of items, including electronics and designer clothing. The market is off Thanon Anusarn Sunthon, just beyond McDonald’s. It is customary to bargain for purchases at the Night Market.

View our full walking tour of Chiang Mai that includes a map. Keep in mind that the entire area of Chiang Mai is only about 15.5 miles so no matter which city gate you enter, you're never far from any other area of the city.

Chiang Mai has been host to some of the biggest Yee Peng and Loy Krathong festivals for generations and it grows in popularity every year. If you’re travelling through Chiang Mai in November this is a truly spectacular experience.

The Chiang Mai Air Force Museum offers an exceptional history of the Royal Thai Air Force and its efforts since its founding in 1930, including its involvement in World War II and the Vietnam War. The museum is open from 8 AM to 3:30 PM six days a week (closed Mondays) and is free to visit.

The Tribal Museum of Chiang Mai celebrates the tribal heritage of the region surrounding the city. The Tribal Museum features a dedicated exhibit for each hill tribe, discussing their history and lifestyle. The museum is open from 8:30 AM to 4 PM Monday through Friday and is free to visit though a small donation is appreciated.

Wat Phra That Doi Suthep shimmers amongst Doi Suthep. This is one of the most spiritual and significant temples anywhere in Thailand and is the reason so many travellers and Thais come to this holy place to become a part of the magic. Begin your exciting journey at the foot of the serpent-lined staircase. You can either walk up the 300 red brick steps or take the lift. There is a 30 baht admission fee here.

This gallery is one of the most unusual you'll ever visit. The first floor features art exhibits and has a mini-bar so the visitors can sip their favourite drink while viewing the exhibits. The upper level of the gallery is an academy and studio for local artists. Opening night events are held for new exhibitions.

Nimman Promenade is a collection of small, independent shops on either side of the sois or streets leading to Nimman Road. the shops sell fashion items and accessories. Some of the stores in this area sell handcrafts and artwork. Nimman Promenade is located at Nimman Soi 4.

Also known as Wat Ket Karam Museum, Uncle Jack’s History Museum is devoted to the Lanna culture that had ruled northern Thailand from the 13th to the 18th centuries. The museum also offers free Lanna dancing lessons every weekend for children.

The Taeng River or Mae Taeng River is a tributary of the Ping River that boasts many rapids, making it popular with white-water rafting enthusiasts. You can also find the Maetang Elephant Park and zipline adventures. For a free day take along a picnic and enjoy the river.

Chiang Mai has a thriving music culture. From traditional Thai bands to thumping clubs, to intimate gatherings; you will find anything you are looking for on the streets of Chiang Mai. North Gate Jazz Co-Op features the best live jazz around.

Each winter, the traditional Northern Thai village of Bo Sang blossoms with bouquets of exquisitely-painted umbrellas in every imaginable shape and size. The Bo Sang Umbrella and Sankampaeng Handicrafts Festival, held on the third weekend of January, has been celebrating the town's cultural history since the 1980s.

Songkran Water Festival is the largest celebrated festival in Thailand, and it is held between 13th and 15th April every year. The Thai New Year is a spectacular event that has incredible energy with people standing in the streets with buckets of water and water pistols ready to splash passersby and each other with water.

Whether you’re travelling by yourself, sharing moments with your partner, or exploring the city as a group, akyra’s varied schedule of carefully curated experiences let you Be Sporty, Be Inspired and Be Curious as you uncover the secrets of one of Thailand’s most engaging destinations.

Chiang Mai, the beating heart of the northern part of the country, has plenty to do and see for visitors. Discover the excitement and thrill of Chiang Mai's bustling city streets and attractions, to the more secluded, more authentic, and more hallowed side of Chiang Mai lying just around a small avenue or down an enchanting wooded trail.