Tesagan Gin Je is a nine day meat free Chinese festival. Commonly known as the Bangkok Vegetarian Festival to non locals, the festival occurs during the ninth lunar month of the Chinese calendar year, so the yearly dates vary. Tesagan Gin Je is also called the Nine Emperor Gods Festival, and is celebrated by Thais with and without Chinese ancestry. Celebrated throughout Thailand, the largest celebrations are found in Bangkok and Phuket.

The festival involves people practising Je by wearing white and being actively mindful of their thoughts and actions. Participants are also expected to refrain from eating meat, or really any animal byproduct, in order to cleanse their body. Despite being called the Vegetarian Festival, this holiday is strictly vegan. 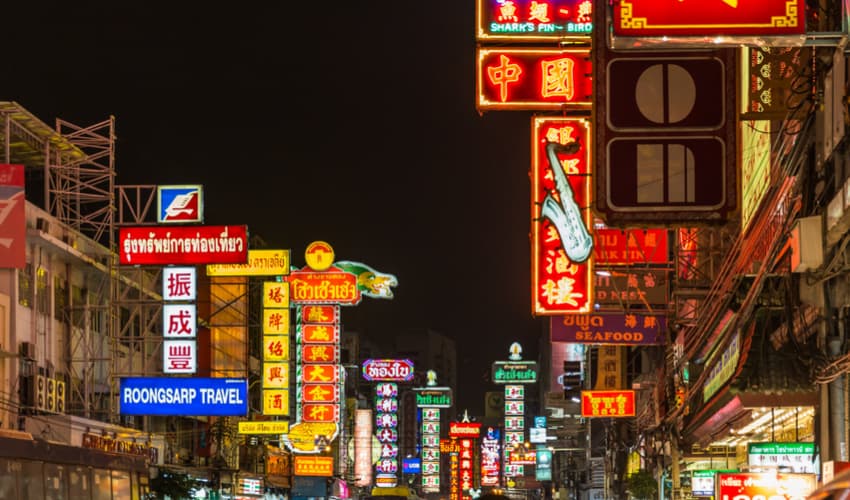 The History of Tesagan Gin Je

While there are many variations of the origins of this festival, the most commonly accepted one is told to relate to a Chinese opera company that visited the area to entertain the locals in the nineteenth century. The story goes that the entire opera company fell ill with an unknown sickness for which there seemed to be no cure. In order to combat the illness, the company turned to the Nine Emperor Gods with prayers and began to follow a strict diet.

The opera company recovered thanks to this, and this interested the locals. As a result, the festival began, with people attempting to stick to a strict Je diet in order to bring good luck to the self and to the community. The Festival is also an opportunity to celebrate the Nine Emperor Gods of the Taoist religion.

The Rules For Tesagan Gin Je

This festival is about more than what you eat. Tesagan Gin Je is a blend of food, festivities, and religious beliefs. Since there is so much spiritual intent behind the festival, the following ten rules are what you should do if you wish to respectfully observe the festival.

As a tourist you are welcome to view processions, but if you want to partake in rituals, the above should be observed.

The Food of Tesagan Gin Je

While it is true that the Bangkok Vegetarian Festival is actually centred around vegan food, the rules for Je are actually a little different. While Vegetarians refuse to eat meat, they may consume other animals products such as milk, eggs, and cheese. Vegans are a little stricter, and refuse to consume any use of animal products in their food. Je takes the practices of veganism, and goes a step further by excluding four kinds of pungent vegetables: garlic, onion, Chinese single bulbed garlic, and Chinese chive.

During Tesagan Gin Je you will not see the traditional dishes featuring stir-fried shrimp, grilled pork, and deep fried chicken or cooked with eggs, dairy products, honey, oyster sauce, shrimp paste, or fish sauce. While popular dishes like moo gata and skewers of bite sized meats or sausage are off the menu for the duration of the festival, you will find a variety of fascinating and delicious dishes that you might not have thought to try before.

Food stalls and restaurants offer bite sized veggie dumpling, steaming hot noodle bowls, and scrumptious deserts swimming in coconut milk. Among the piles of deep fried spring rolls and steamed gyoza you will find obvious substitutions for meat like mushrooms, tofu, and taro, while in other dishes you will come across substitutions that taste exactly like the real thing.

Soy beans and products, tofu, other bean, and vegetables become the main source ot proteins and nutrients during the length of the festival. Calcium tends to come from roasted black sesame seeds. The popular seasoning of fish sauce is instead replaced by soy sauce and mushroom sauce.

Thailand is the perfect country to visit for vegans and vegetarians, as they will always be able to find food that fits their lifestyle, but Tesagan Gin Je is the perfect place to enjoy a variety of vegan delicacies, whether you have practised veganism or vegetarianism for years or you have decided to give something new a try.

The Festivities of Tesagan Gin Je

This festival is more than just a buffet of culinary delights. A variety of festivities occur, ranging from religious ceremonies to parades featuring dances in traditional Chinese dress and vibrant long dragons. Firecrackers and drums resound through the skinny sois of Bangkok. A variety of smaller groups pour into the main parade along the multi-lane Yaowarat Road.

Sacred rituals are performed at various temples that are decorated with lanterns, candles, and burning incense. People make merit at these temples and shrines during this time, while other devotees, known as Ma Song, perform tongue slashing and other ritualised mutilations as well as aesthetic displays, such as the famous act of walking barefoot over hot coals.

There are also nightly performances of Chinese opera in addition to a variety of performers and musicians bringing a lively aura to the festival. There is plenty to draw in when you wander through the vibrant and vivacious Bangkok Vegetarian Festival.

The Talat Noi community hosts some of the most popular activities during the festival. While the schedule is often varied, there is a general pattern to it that you can usually expect to come across when choosing to celebrate among the community.

Starting one day before and ending one day after the traditional nine days of the festival, a lot of the activities that occur are actually religious celebrations. If you plan on attending, then do so with the utmost respect to the local culture.

Day 2: This is technically the first day of the festival, called Chew Ik, and it is today that traditionally people will go to the shrine to worship the god.

Day 7: The sixth day of the festival (but seventh for related activities) overlaps with a Thai Buddhist day, so there is double the reason for activities. People will release fish, turtles, birds and other such animals into the river and sky.

Day 8: This is Chew Chik day, and that means that there will be a Loy Kratong style boat procession along the river from Chow Sue Kong shrine to other shrines near Krungthep Bridge and then back to Wat Kalayanamit. This usually starts in the middle of the day.

Day 9: There will be merit making ceremonies during the day and then a dragon march procession in the evening.

Day 10: This is the official last day of the festival, and so there will be a lot of offerings for the dead spirits and donating of sacred rice.

Day 11: On this day they have a ceremony to send the god back to the river, thus signifying the end off the celebrations.

The Tesagan Gin Je festival is something that you will have to experience for yourself to fully appreciate. Whether you choose to go as a participant or as an observer, you will find a host of intriguing and enrapturing activities to explore. Whether you are a lifelong fan of vegetarian and vegan foods or simply someone that likes to leave no stone upturned when it comes to travelling, the Bangkok Vegetarian Festival will be sure to sate your appetite.

Bangkok Hotels for the Festival

akyra Thonglor Bangkok Hotel is nestled between the exciting Sukhumvit Soi 55 and Petchaburi Road, the 148-key hotel offers studio rooms, plus 1, 2, and 3-bedroom serviced apartment suites, tapping into the trendy local aesthetic with a strong, contemporary design. The boutique en-suite bathrooms here are elaborately adorn with Ayurah amenity set offering aromatic sensation that whisks away stress and boosts a relaxing ambience. The self-contained sanctuaries are perfect for leisure travellers, while guests passing through on business will want for nothing with an adjacent lifestyle mall and 24-hour supermarket.

akyra TAS Sukhumvit Bangkok Hotel is a stylish, innovative luxury boutique hotel located in the epicenter of Bangkok’s most dynamic tourism area on Sukhumvit Soi 20, a lively neighbourhood known for its fine restaurants and nightlife, as well as lifestyle malls, quality spas and green recreation spaces.