Is Chiang Mai Worth Visiting?

Yes - Chiang Mai is Worth Visiting if you get the chance!. Chiang Mai is an ancient city with a modern twist and all the amenities and activities you'd expect to find in any travel destination.

If you’re planning a trip to Thailand, chances are, Bangkok is at the top of your list for cities to visit. And with good reason: Thailand’s capital city is an amazing place to visit. It’s a thriving metropolis that's home to all walks of life. There are endless activities, and the bustling city is always growing and developing, making it one of the top tourist destinations in the world.

But in recent years, Chiang Mai has become an equally sought-after destination for tourists. As a destination, it’s a little more off the beaten path than Bangkok. But this is part of its appeal — Chiang Mai is a city that’s speckled with ancient ruins of forgotten kingdoms and surrounded by quaint moats and canals. It’s a city that’s also close to nature and is actually known for having the best elephant sanctuaries in Thailand. And, of course, Chiang Mai offers all the usual activities you’d expect to find in a typical travel destination, such as museums, cafes, restaurants, shops, and plenty of businesses that can accommodate you on day trips to go hiking or zip-lining. 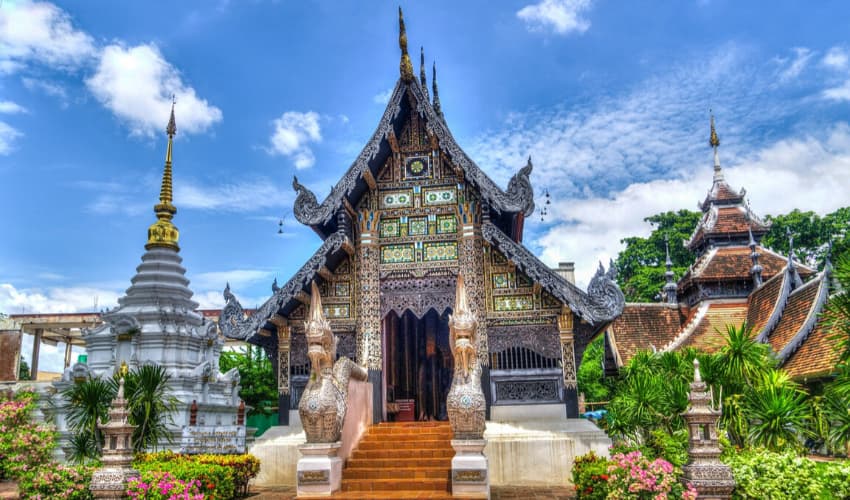 Thailand is a tropical country with lush jungles surrounded by warm oceans. Bangkok can be swelteringly hot, almost to the point of it being unbearable. While Chiang Mai is still on the warm side, it’s considerably cooler than Bangkok. It’s situated in the mountains at a high altitude, so temperatures are much more bearable than other Thai cities on the southern end of the country. If you’re looking for a city in Thailand that’s a little cooler, Chiang Mai might be the answer for you.

How Safe is Chiang Mai at Night?

Generally speaking, Thailand is a relatively safe country to visit. And, as in other places, you can experience the occasional pickpocket, but generally, most places in Thailand are laid back and safe for travellers. Chiang Mai is definitely more laid back in this regard when compared to Bangkok. It’s perfectly safe to travel around this city, day or night, and, in fact, it has several after-dark amenities for the veritable night owls. There are night markets, as well as the famous night safaris you can partake in. And while it’s not as electrifying as Bangkok’s, Chiang Mai does have a decent nightlife of its own.

Which is More Affordable: Bangkok or Chiang Mai?

Thailand has long owed its popularity, in part, to its affordability. Meals, accommodations, and nightlife are all extremely cheap when compared to other popular tourist destinations. This is, of course, true for Bangkok, however, as its popularity has surged, so has its prices. Chiang Mai, on the other hand, is still one of the most affordable destinations in Thailand. Relative to Bangkok, everything is going to be between modestly cheaper to significantly cheaper.

Getting Around Chiang Mai

Compared to Bangkok’s jam-packed bustle, when it comes to getting around, Chiang Mai is a paradise. There are far fewer tourists and people crowding the streets, so it’s much easier to get around here. Renting a scooter or motorbike isn’t uncommon, and it’s far less dangerous to do so in Chiang Mai than in Bangkok. Moreover, Chiang Mai also has what they call songthaews, which is a large truck with a couple of benches on it that circles the center of the city regularly. There’s extremely easy and accessible to hop on and off of, making getting around Chiang Mai a breeze.

Bangkok is more of a traditional city. As tourists keep pouring in, Bangkok keeps developing things like shopping malls and luxury hotels. As one might imagine, this doesn’t do much for the nature vibe.

Chiang Mai is a bit different. For one, the city is surrounded on all sides by mountains, so there’s always a backdrop of rocky terrain complimenting the city. Moreover, the city’s unique status as the center of the ancient Lanna Kingdom gives it a sense of timelessness that you won’t get in Bangkok. The city walls, and canals you’ll encounter make it feel more like an archaeological site and less like a city at all.

If you decide you want to venture outside the city, you’ll encounter countless species of wildlife to hold your attention. In fact, Chiang Mai is known for its night safaris and zip-line jungle tours, as well as being the gateway to some of the best elephant sanctuaries in Thailand.

Things to Do in Chiang Mai

Like Bangkok, Chiang Mai is itself a tourist town, but the vibe here is much different and caters to a more laid back sort of tourist. With that said, there are a plethora of activities and adventures to partake in while in Chiang Mai, below being just a few you should add to your itinerary.

The street markets in Thailand are a huge draw for tourists. Chiang Mai is no exception, with the markets during the weekends pulling in thousands of people. You can find everything from jewellery to food at these markets, and many tourists list them as one of the highlights of their trip to Thailand.

One of the more popular street markets is the Warrior Market. It’s situated in the center of Chiang Mai’s Chinatown, and the market is known for its eccentric atmosphere and vibe, and it’s regarded as one of the few places where you can still experience authentic Thai culture. The market is in a multiple story building, and it offers everything from food to clothes to arts and crafts and ceramics.

If you’re a history and culture buff, you’ll definitely want to consider Chiang Mai for its rich history as the principal city of the ancient Lanna Kingdom. The Lanna Kingdom, which was especially prevalent between the 1200s all the way up until the mid-1800s, was spread across northern Thailand, and Chiang Mai is host to countless ancient relics of this kingdom and the Karen Hill tribes/u>. Temples, most of which are in a unique Burmese style of architecture, speckle the city, and there are countless other attractions to visit and behold from this once-great empire.

While there are countless temples to visit in Chiang Mai, there are a few notable ones that you’ll want to go out of your way to visit. Doi Suthep is one of those temples. It’s a beautiful and elaborate temple that overlooks the city, and on clear days, you can relax here and take in the entirety of the city’s beauty from atop the temple.

Chiang Mai is a fantastic city to visit in Northern Thailand. If you’re looking for a place that’s a little more off the beaten path and a little less developed, then you’ll want to give this ancient a city strong consideration. The moats, canals, and ancient Lanna temples and ruins give the city a timeless and romantic vibe, And if you’re looking to be close to nature, this city will not disappoint. With its countless activities to partake in and endless sights to see, Chiang Mai is well worth your time and money to visit.