Art In Bangkok With The Bangkok Art Biennale

The Bangkok Art Biennale is being held at the Helix EmQuarter in Bangkok from October 19th 2018 until February 3rd 2019. THAI or the Thai Airways International Public Company Limited will be joining the festival. This is the most highly celebrated arts festival in the world and has never been held in Bangkok prior to this momentous occasion. The festival is a blissful journey through an exhibition featuring Ayatana. The inspiration is Panya Vijinthanasarn, a Thai national artist and painter. The six senses of Ayatana are taste, sound, the sense of the heart, touch, smell and sight. These senses bring harmony and beauty to Thai culture, life and art. THAI is the cultural ambassador and the national carrier of the Kingdom of Thailand. They have integrated these senses into an artful journey filled with genuine humility and warm hospitality.

The Art of Journey is beautifully represented by "Smooth as Silk", the embodiment of graceful experiences and seamless travel working together in perfect harmony. The visitors and customers of THAI are being offered a maximum of two movie tickets for each person participating at the branches for the Major Cineplex. These individuals simply scan the QR code, then use social media to share the lovely wallpaper photos of Ayatana. When air ticket purchases are presented with these photos at the 2018 Visit Japan F.I.T Travel Fair, special gifts will be received. The travel fair is held from November 2nd through November 4th of 2018 at the Siam Paragon. This offer is good for as long as supplies last.

The Mission of the Bangkok Art Biennale Foundation

The Bangkok Art Biennale Foundation strives to inspire and engage a diverse international and Thai audience by recognizing, appreciating and fostering contemporary art exhibitions. These exhibitions are known as the BAB or the Bangkok Art Biennale. This is a non-profit foundation producing and supporting creative and artistic Thai projects. The foundation maintains and develops art activities to promote Bangkok as a superb destination for leading contemporary art. The foundation contributes to and organizes experiences in contemporary art for numerous diverse audiences using publications, workshops, conferences and guided visits. Tourist attractions and leisure activities are created by enriching and revitalizing art loops and art walks in Bangkok. Art programs and training are provided for the volunteers and students. 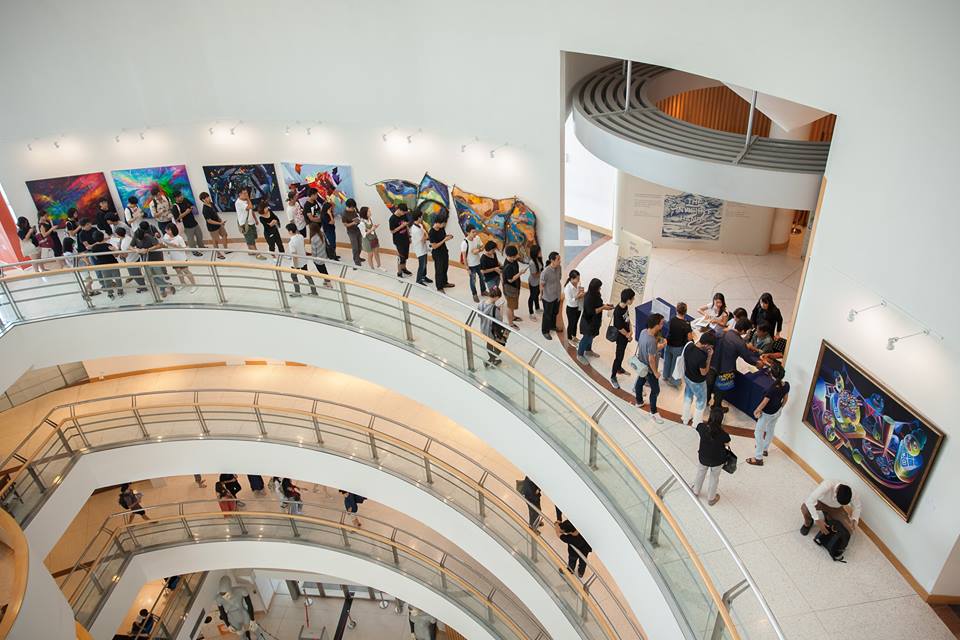 The exhibits at the Bangkok Art Biennale are extremely varied and consist of the works of numerous talented artists. The exhibits are:

Defying the Taboos of Thailand Through Art

Peung was standing in the glow of the red strip light from a massage parlor. She turned to address the camera and spoke of her dream to build her family a new house. Her aspiration is very simple, she wants to open a little shop so she can sell groceries. What makes her ambition so extraordinary, is that she has been granted any kind of public platform so she can speak. Peung is only one of the hundreds of thousands of Thailand's sex workers. She stands with seventeen additional sex workers from Chiang Mai, a city located in northern Thailand. Chumpon Apisuk is the amazing artist who created the video titled I Have Dreams. This is one of the most poignant and touching of 75 works featured at the Bangkok Art Biennale. The inauguration opened during the weekend and the festival will continue until the beginning of February.

The artist believes the time has come for people to look at these women, to listen to what they have to say and to face them. Chumpon Apisuk has been working for three decades alongside the women in the sex industry. Apisuk believes it is time the humanity of these women is recognized. He wants people to stop acting as though they do not exist. There are many other artists using the Bangkok Art Biennale specifically to draw attention to work defining the taboos of Thailand. This includes not only the social stigmas but the political restrictions the military government imposed in 2014 when they gained control through a coup.

The Sensitive Topics Presented at the Bangkok Art Biennale

The Bangkok Art Biennale has attracted some of the biggest names in the world. This includes the Danish art duo of Elmgreen & Dragset's installation, Marina Abramovic the performance artist and Yayoi Kusama the Japanese sculptor. The Thai artists, the artistic director Apinan Poshyananda and the curators are the ones responsible for leading the event into territories seeming incredibly bold for a country who has often heavily censored the arts. The topics covered by the festival are of an incredibly sensitive nature. This includes the conflicts and issues occurring in Thailand’s Muslim deep south, the situation of the women in the patriarchal society of Thailand, the friction between the Buddhist and Muslim communities in the country, the pollution on the rivers of Thailand causing an environmental pollution plague, the country's refusal to accept Rohingya refugees from from Myamar under persecution and the abuse the migrant workers are suffering.

The Force Behind the Bangkok Art Biennale

One of the current issues in Thailand is the people do not want to ask for any trouble. This has led to the event being led with a defiant spirit by Poshyananda, the driving force behind this event. Prior to curating the event, Poshyananda served the Department of Culture for the Thai government. He spoke of the many people who told him they did not want to ask for any trouble. He simply smiled and told them he had chosen to walk a much more difficult path. Due to the military, many people have been under intense scrutiny for five years. The opinion was the time was right to take a deep breath so the artists could express themselves freely. Poshyananda stated, so far there has not been any interference from the government. This is despite two of the most famous temples in the city being used for venues for the Biennale. The use of both Bangkok temples of  Wat Arun and the Wat Pho required approval from the government. 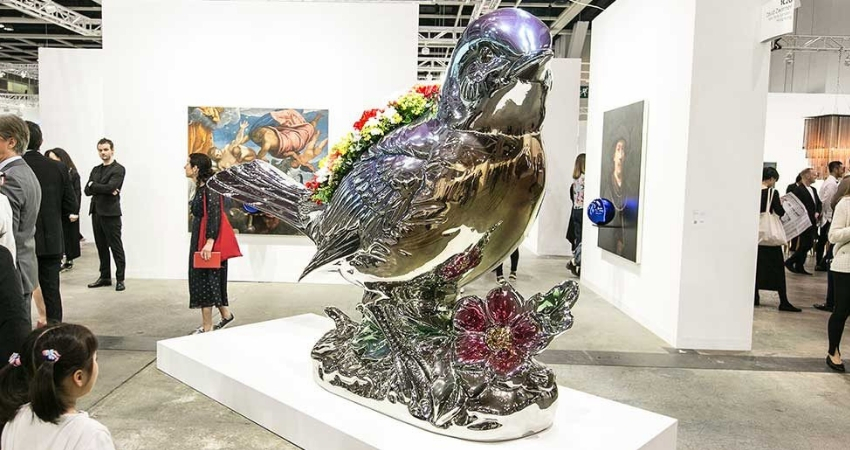 Censorship of the Arts in Thailand

The art censorship in Thailand is considered to be both heavy handed and arbitrary. The military government thoroughly vets all films, yet they are more sporadic in the way they monitor the visual arts. A lot of artists have admitted they remain in a state of anxiety due to incidents including a Bangkok gallery being seized the previous year due to two photographs regarding the ninety individuals killed because of a military crackdown. One of the most open political artists in Thailand is Jakkai Siributr. The artist stated there were numerous artists who censored their own work because they were not willing to take a risk. Jakkai Siributr is being featured at the Bangkok Art Biennale with a film and a series of flags portraying the genocide in Myanmar of the Rohingya. The artist is willing to go as far as possible and admits doing works much more critical of the Thai government. These works appeared in Singapore but will not be shown at the Biennale.

The majority of political works being exhibited at the Bangkok Art Biennale resulted from extremely personal experiences. Sornchai Phongsa is a sculptor displaying a large bamboo sculpture. This is located outside of the Culture Center and was built through a collaboration with illegal migrant workers hired by the sculptor. This relates to the background of the sculptor whose parents were illegal migrant farmers. They fled Myanmar due to the ethnic persecution and fled to Thailand prior to the birth of their child. Sornchai Phongsa was left with no rights, no citizenship and no identification card in the only country he had ever lived in. He started working at the age of twelve. He earned just 220 baht per day to lug very heavy bags filled with fruit.

As one of the most widely recognized young artists in Thailand, Phongsa is hoping his work at the Bangkok Art Biennale will draw attention to the hidden and invisible migrant workers responsible for building the city. These workers are taken advantage of and have no rights. Thailand has as many as 3.8 million migrant workers. Some of them are illegal, some are legal and their citizenship and rights are ignored. Phongsa knew a four year old girl who died from a fall into hot oil in a factory. Nothing was done because both of her parents were migrants. The child did not receive any justice because the system did not care. The artist want her work to be the voice for many people including the little girl who lost her life.

The artists at the Bangkok Art Biennale are also addressing another sensitive issue. This is referred to as the hidden war and has raised violence in Thailand's southern states since 2004. This war is between the Thai military and the insurgents. Nearly 7,000 lives have been lost and ninety percent of them were civilians. The Muslimah Collective directly confronted the money the conflict was costing. This is a group of four female Muslim artists from the area. Keeta Isran is one of the members and stated she does not believe the war in the south should even be discussed because she views it as a reality of life. When violence and war are discussed, the stories the people never hear concern the women who are suffering. The art collective was formed to document the experiences of the members through their creative works.

Poshyananda stood on the Chao Phraya River's banks in Bangkok. This is where a lot of the venue exhibits were placed. Poshyananda spoke of the risks the artists had taken for the Bangkok Art Biennale. Many of these artists have had trouble before so taking a risk has become integrated with the excitement. Nobody stepped in to dictate what these artists can or cannot exhibit. They simply create and show their work for the people. Poshyananda also said if trouble arises, they will handle it at that time. When a passing boat interrupted Poshyananda's statement, a laugh erupted followed by the words the military must be on their way.

Our Bangkok hotels are offering 2 night and 3 night packages including a 4 hours guided tour of the exhibitions.

The tour will be led by the team of Samatcha “Pop” Apaisuwan, a photographer and visual artist whose creative works have been employed by Thailand's Ministry of Culture and the Princess Marsi Foundation, among others.