Chiang Mai is located in Thailand, and the area immediately around the international airport fills the first few minutes with just a taste of what is to come. Temperatures don’t get much higher than 95 degrees Fahrenheit in an average September, nor do they go below 70 degrees during the day. Breezes often help cool the day, blowing anywhere from zero to ten miles an hour and rarely at about fifteen miles an hour.

There are often clouds over Chiang Mai in September. Combine this with a lot of rain and high humidity, and there’s a reason tourism is often at a low. However, this allows more interaction with natives for tourists during this time of the month.

While the weather may turn some away from Chiang Mai in September, there are plenty of fun activities to enjoy. One such event that can be enjoyed all month long is the blooming of the wild Mexican Sun Flower. The bright yellow flower blooms well in areas with poor soil quality, and is used to help increase nitrogen, phosphorus, and potassium in the soil. Rice farmers in Chiang Mai find this particularly helpful.

Starting on September 20th and going through October 10th, the Poi Learn Sip-ed (or Ok Pan Sa) Festival is a celebration of a Lord Buddha returning from giving sermons to his mother, who resides in heaven. There is an array of dances with performers dressed as animals – based upon belief that the human and animal kingdoms are equally joyful for the return of Buddha. A castle of wood that is covered in colourful paper, fruit, flags and lights. It is placed in a courtyard of a home or temple to welcome Lord Buddha home. 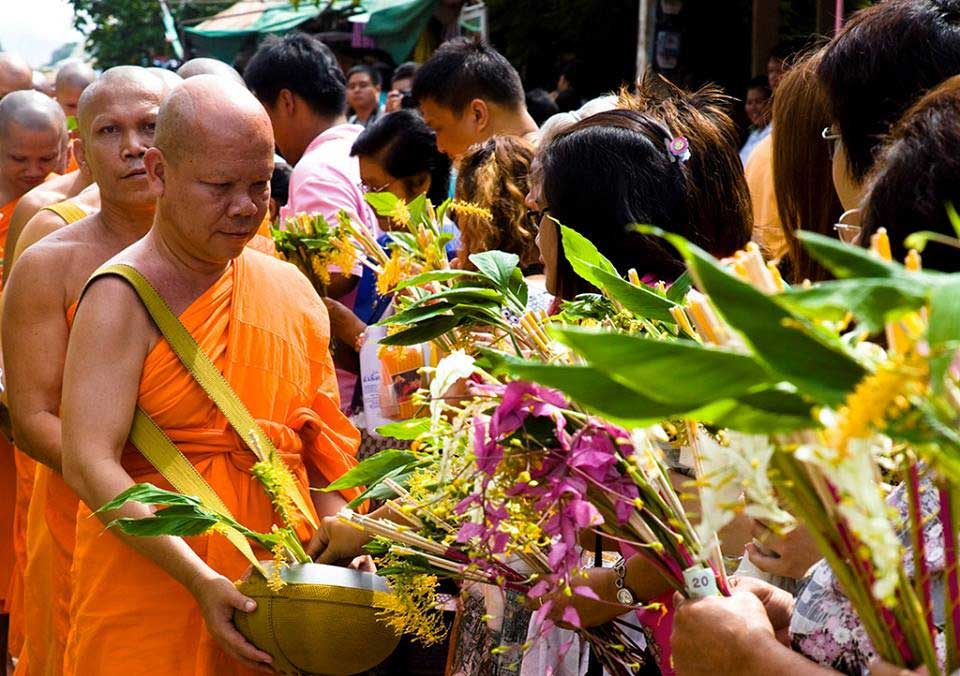 November is the month of the Loi Krathong festival, though some sites say it is held in September. This is a festival held on the full moon of the 12th Thai month. The krathong is a basket that is floated upon the river. Decorated baskets compete for prizes and are often launched by government offices and corporations, among others. Some have small coins or candles, incense sticks, and banana leaves. The festival is a way of thanking the Goddess of Water named Phra Mae Khongkha.

Yi Peng, another Thai festival, is held around the same time as Loi Krathong. Similar to a scene in a 2010 movie, the festival launches thousands of floating lanterns, or sky lanterns. They resemble jellyfish in the sky. However, these lanterns are floated under strict restrictions from the government since they can pose dangers to aircraft above. 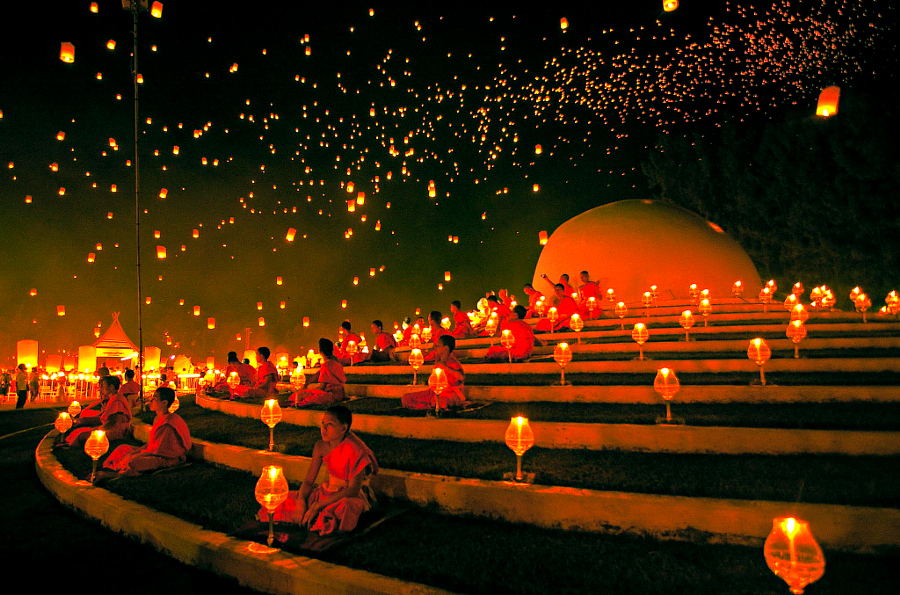 The tourism Festival Parade of the 1,000 Candles also takes place in September. Locals know the festival as Lua Ten Heng. Held in conjuncture with Loi Krathong, the locals of Thailand have invited tourists to come visit for Loi Krathong. Chiang Mai, specifically, will celebrate with Buddhist chanting – which is incredibly sacred – the 23rd lantern procession, a candle lighting ceremony, Yi Peng boat races and many contests and competitions.

The Salakapat Merit Making holiday takes place in the end of September. The idea of merit is an old one in Buddhism. There are many ways to gain merit, and the merit is used to lessen suffering in the next life, or up to a seventh of a person’s merit can be transferred to a deceased relative to lessen their suffering in their next life. Some ways to gain merit are giving up wrongful conduct of any kind, abstaining from killing (or stopping if already on that track), giving up stealing, giving alms, and observing virtue. The list is by no means an all inclusive one. However, to give merits to a relative, the giver must be doing it for their relative and for the benefit of sharing – not for a selfish reason.

The September Equinox is another holiday that is observed. It doesn’t vary the length of the day much in Thailand, but the way it affects the country is interesting. It gets light in June at about 5:51 AM, and in December comes up at 6:37 AM. In September, it is between those two times. It is often light enough for tourists who are up early enough to see monks on their alms rounds and get good pictures at about 6:20 AM in September.

These seven holidays and festivals keep tourists busy all month long when they visit Chiang Mai in September. There’s no shortage of cultural shock and heritage during the month. A day of about eleven and a half hours of daylight in September, a tourist can take advantage of it at these festivals, seeing the sunflowers bloom, or at night watching the floating lanterns rise up into the sky.

This newly opened boutique Chiang Mai hotel is grounded in a strong tradition of hospitality. Here you’re assured of:

Enjoy the delightful customs of Akyra and Chiang Mai this September!